I usually like to keep The Jeans Blog an extremely positive place, but lately I have noticed that the trends in denim are taking a turn for the worst. I’m not sure what’s happening with some of the designers thought processes, but I remember when brands used to release the most gorgeous jeans that were the trend of the moment and everyone wanted them. I’m thinking back to Levi’s 501’s, the popular J Brand 912 – which made skinny jeans famous again, their Thrasher and Zombie jeans, the Houlihan, Current/Elliott and their Boyfriend Jean movement, or SIWY with the cut off denim shorts… There’s been so many amazing moments, but everything feels lost now.

Don’t get me wrong, I absolutely love the embroidered denim trend, but it’s not one specific jean that is coveted as everyone is on board that trend. I feel like everyone has covered everything possible, from rigid and raw denim, to super stretch and sweat pant material, from distressing and shreds to plain and simple, there’s not really anywhere left to go in terms of making waves, so the only thing left to do is think outside the box. This is what has led me to create this blog post on the 12 craziest and worst jeans of the moment. Now not all of these are awful, some are quirky and fun, but the rest are just a ‘what were you thinking?!’ moment to me. What’s your opinion on how jeans are changing as time goes on? There’s not so much emphasis anymore on the wearable styles, they just seem to be the basics now. Check out the crazy list below. 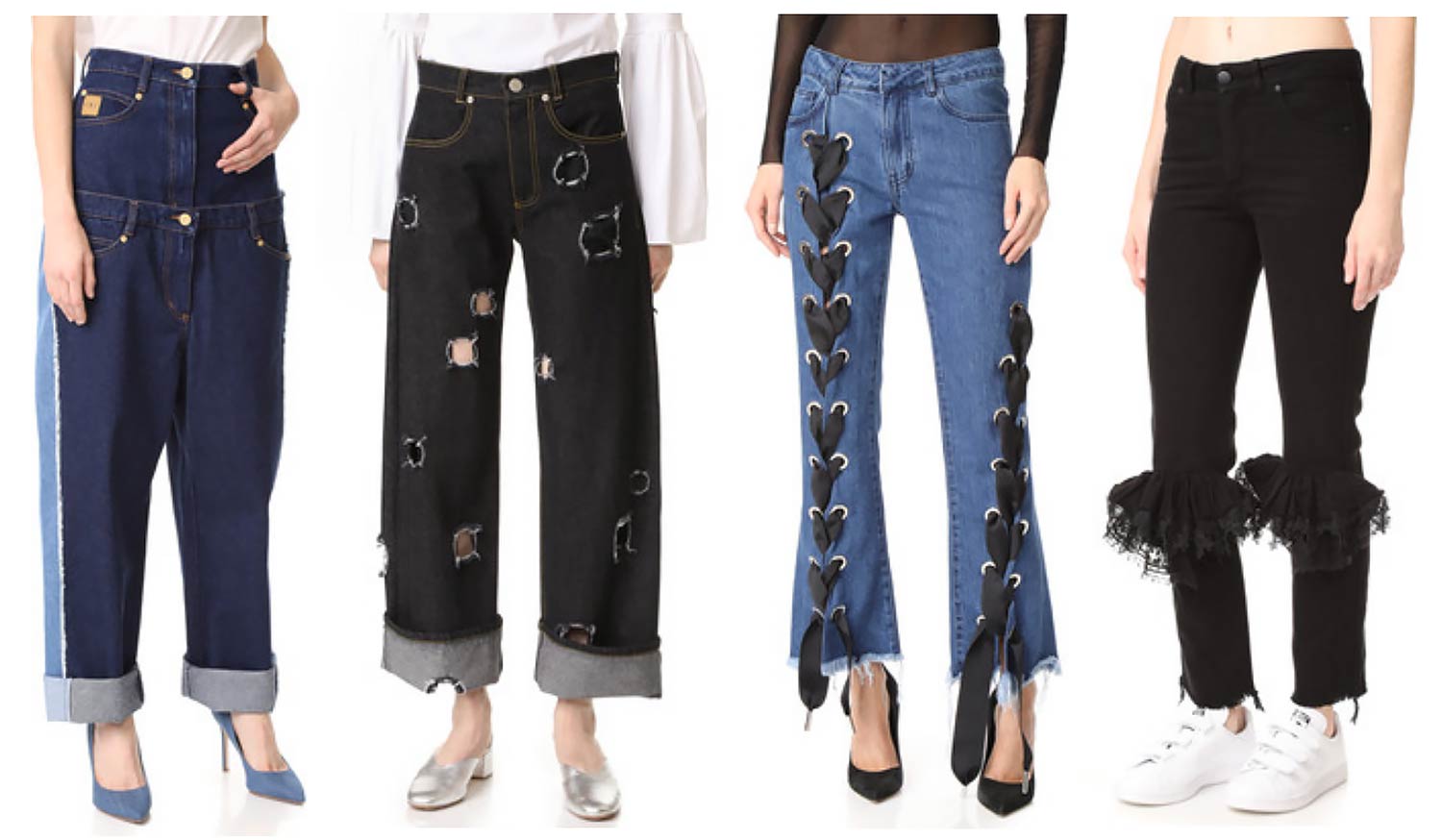 Natasha Zynco – When I first saw these jeans, you can imagine my face as the bulging eyes emoji. I had a WTH moment as soon as I scrolled onto this new style. It’s no wonder to me that they are in the sale. I’m all for high rise jeans, but what’s up with an actual double waistband like this? It’s like two jeans in one, with one hanging far down that it’s saggy. It’s extremely confusing, highly unflattering, and the big turn up and wide leg just makes it worse. I’ve tried to see how these could be cool, and I can’t. It’s even worse that they come with a price tag of over $600… I honestly can’t understand this pair.

Regina Pyo – Now in comparison to the first pair of weird jeans, I would think that these are not that bad, but if you look at them on their own, they’re definitely crazy too. It looks like these baggy and awful fitting jeans were blasted with a massive shotgun spray, plastering huge holes all over the jeans. Sometimes bullet holes can look cool, when done right (check out Diesel’s 71J wash), but when they’re like this on a completely plain indigo blue, it’s questionable.

Marques Almedia – This pair of jeans isn’t so much ugly or horrible that you wouldn’t wear them, but they’re definitely crazy, in a good way, I think. The ribbon lacing is quite unique and even though I think it would look better with thinner ribbons, as least these could be seen as fun during fashion week or by someone with a more flamboyant fashion sense. They’re weird and crazy, but not awful.

Preen by Thornton Bregazzi – I thought these were just another simple black skinny jean when I saw them quickly, but boy was I wrong. I don’t understand much of the thought process behind this pair. It’s like a tulle skirt has been put around the knees, which is such an odd placement. The jeans are plain everywhere, then you have this tulle skirt for the knees. What’s that about? They’re not as terrible as some, but I don’t understand the idea behind designing these? It’s almost like they had a plain pair of jeans and thought that they were boring, so stuck anything on them and came up with this. Hey, maybe they might make great skateboarding jeans though as they can protect your knees when you fall. 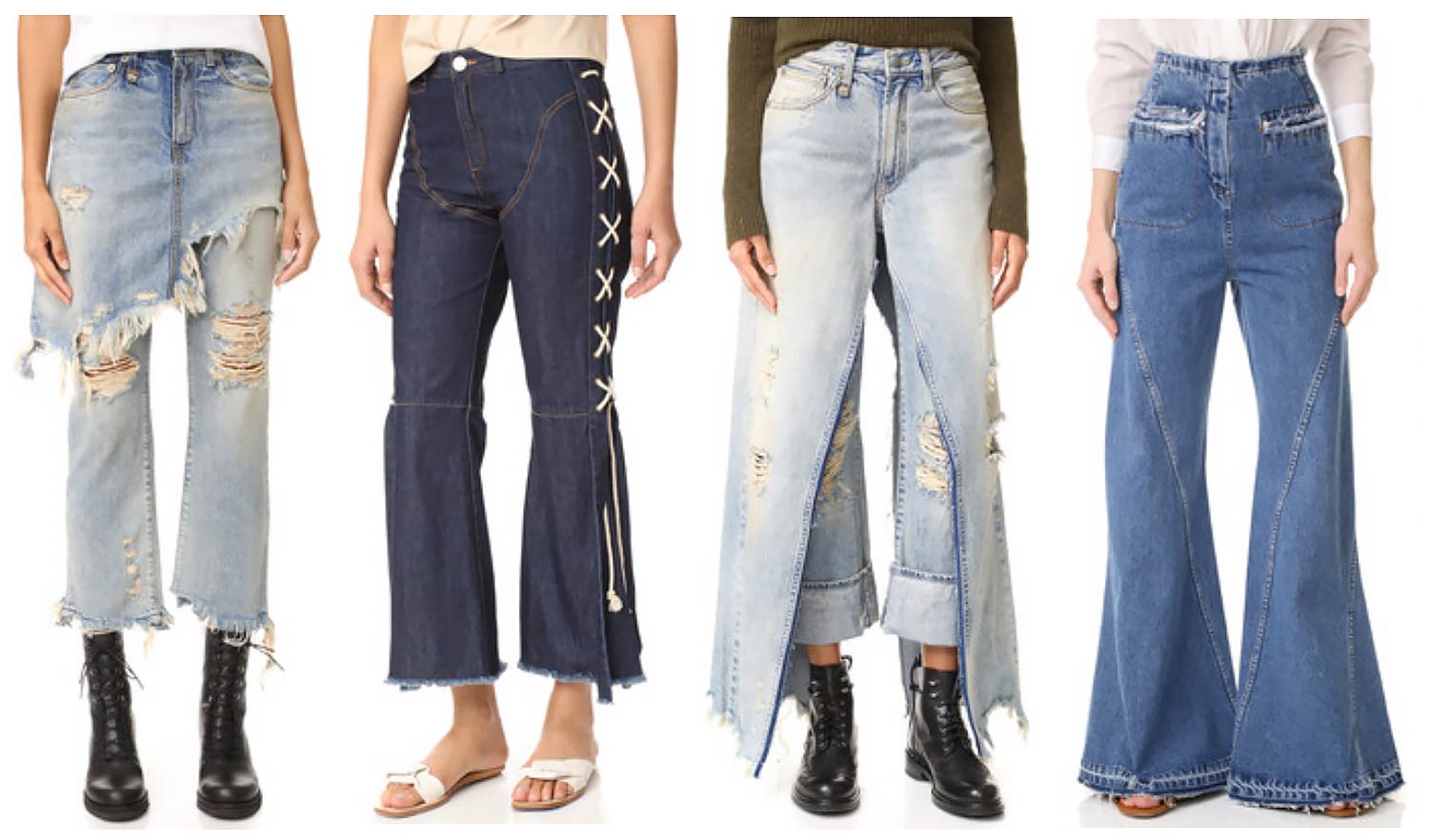 R13 – These skirt jeans have been available for many months now and I remember that Gigi Hadid rocked a pair, but I still can’t bring myself to like them. I don’t understand the purpose of the asymmetric skirt that’s shredded over the shredded jeans. It’s such a weird concept. It almost feels like they tried to make the Skort idea work on a pair of jeans, and it didn’t. This pair isn’t as bad as the other pair I will speak about soon, but they’re definitely not something I would wear. R13 usually do great styles, but not this time.

VALE – Now this pair isn’t exactly awful, but they’re weird and I don’t understand them. The seam around the crotch is strange, almost like it’s encasing your private region, they flare out from the knee almost like a skirt would on a dress, then they have lace which is cross threaded halfway up the outerseams. They’re so weird when you break them down and look at them, but oddly enough I could probably still see people wearing these during fashion week.

R13 – Much like the pair I just covered above, this skirt on top of a pair of jeans idea is one that R13 have been releasing in a few variations. This pair is worse than the first pair because the skirt is full length and split open at the front. It’s extremely futuristic and odd, almost like adding a cape to something. I don’t think we have seen anyone wearing this pair and celebs usually covet R13’s items, but this pair I can understand why nobody has. I really don’t get them.

Esteban Cortezar – A high rise flared jean isn’t nothing to shout about, however I think the fit and the wash of this particular pair could do with so much improvement. Firstly, the front utility pockets are massive, covering up the whole of the lap area and making them look extremely unflattering, then the flare is just baggy, loose, and much too wide, then lastly, there’s that seam that goes around the leg. All of this coupled with a wash that looks like it should cost $5 is just a no from me. Like I said, they’re not extravagant and crazy, but they’re not flattering and pretty like jeans should be. 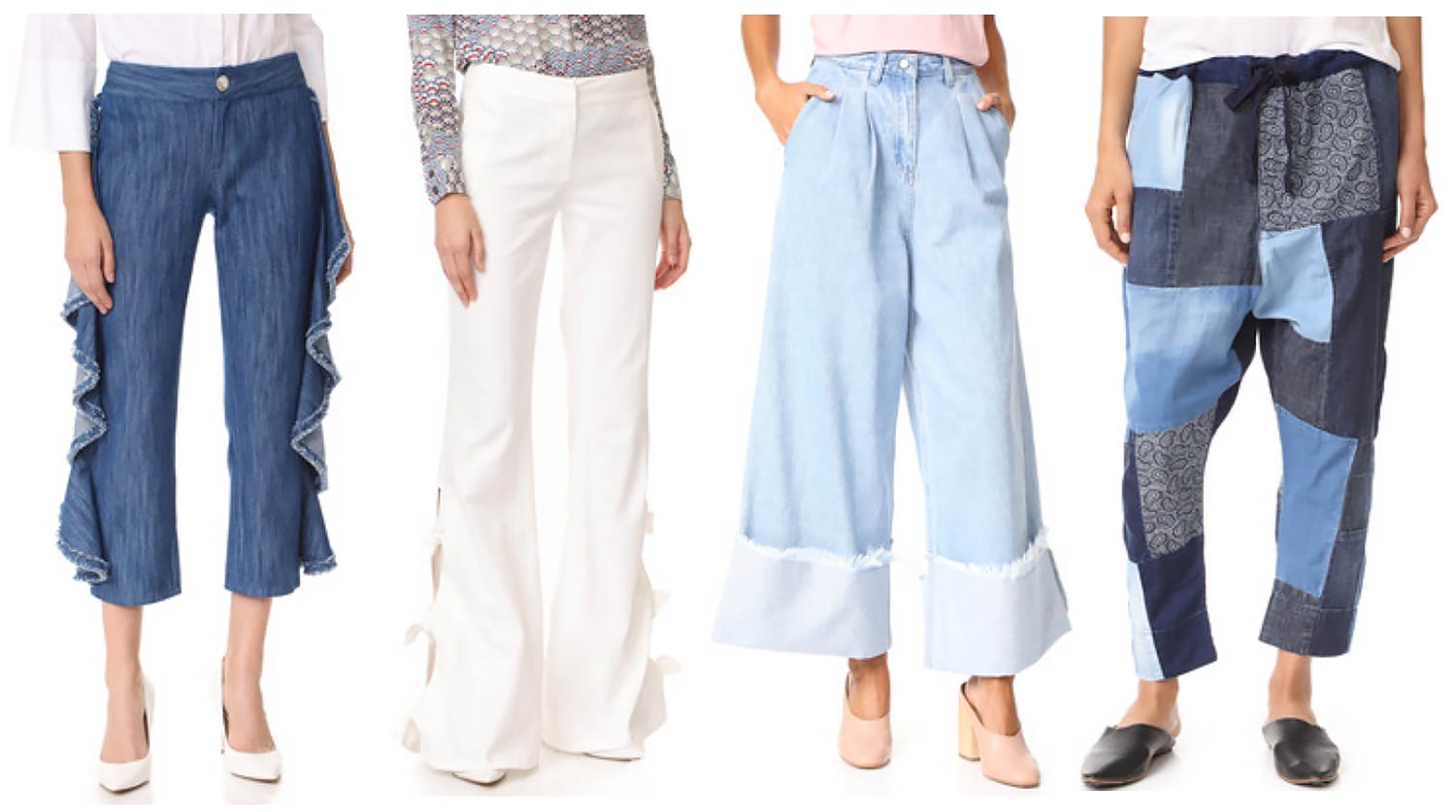 Alexis – I have noticed a lot that the flamenco jeans trend, or ruffles trend, has been creeping up and I just don’t get it. This pair here by Alexis are really odd. The mid rise, cropped leg would be fine on its own, and the blue isn’t even that bad, it’s a bit flat, but that’s fine. It’s the excess fabric which ruffles on the side. I can just imagine that flapping in the wind and getting in the way of everything. It hides your figure, so I don’t understand why someone would want flappy jeans like this.

Alexis – From Alexis again, we have this odd looking pair of extra length, white, giant flares. Flares are no news to us, but when they’re this wide which covers the entire shoe in a thick fabric, it’s very 70’s. This pair features big bows on the bottom half of the jeans, which keep the splits together, and they’re so strange. They’re not the worst pair I have seen (that goes to Natasha Zynco above) but I don’t think they’re wearable. Can you imagine trying to do shopping in these or getting in and out of a car? Or worse still, navigating an escalator?

EDIT – This pair of wide flare capris aren’t over the top, but I really question whether anyone would wear them. I wouldn’t. I don’t like that much fabric going on, plus the pleated paper bag style waist is not very flattering, neither is the thick, wide hem. I understand that thick wide hems on jeans are a trend, but there comes a point when it’s too much, and for those of us who are a regular height, these will make us look so short and completely swamp our bodies.

PRPS – Finally, I have this pair here by PRPS. I don’t think these are ugly, or too weird, or awful, but they are a bit crazy, but in a wearable way. I could see someone like Gwen Stefani rocking these and making them look stylish. I’m not a huge fan of the fit of these jeans as I find fits like that make me look sloppy and frumpy, since they aren’t flattering, but I do like the patchwork denim going on. It makes them stand out.

– So, this is my roundup of the 12 craziest and worst jeans of the moment, some of which are completely unwearable and insane, while others aren’t so bad. I would love to know what questionable jeans you have seen lately? And also if you would like more posts on topics like this! Don’t forget to check out my post on crazy jeans for fashion week too.