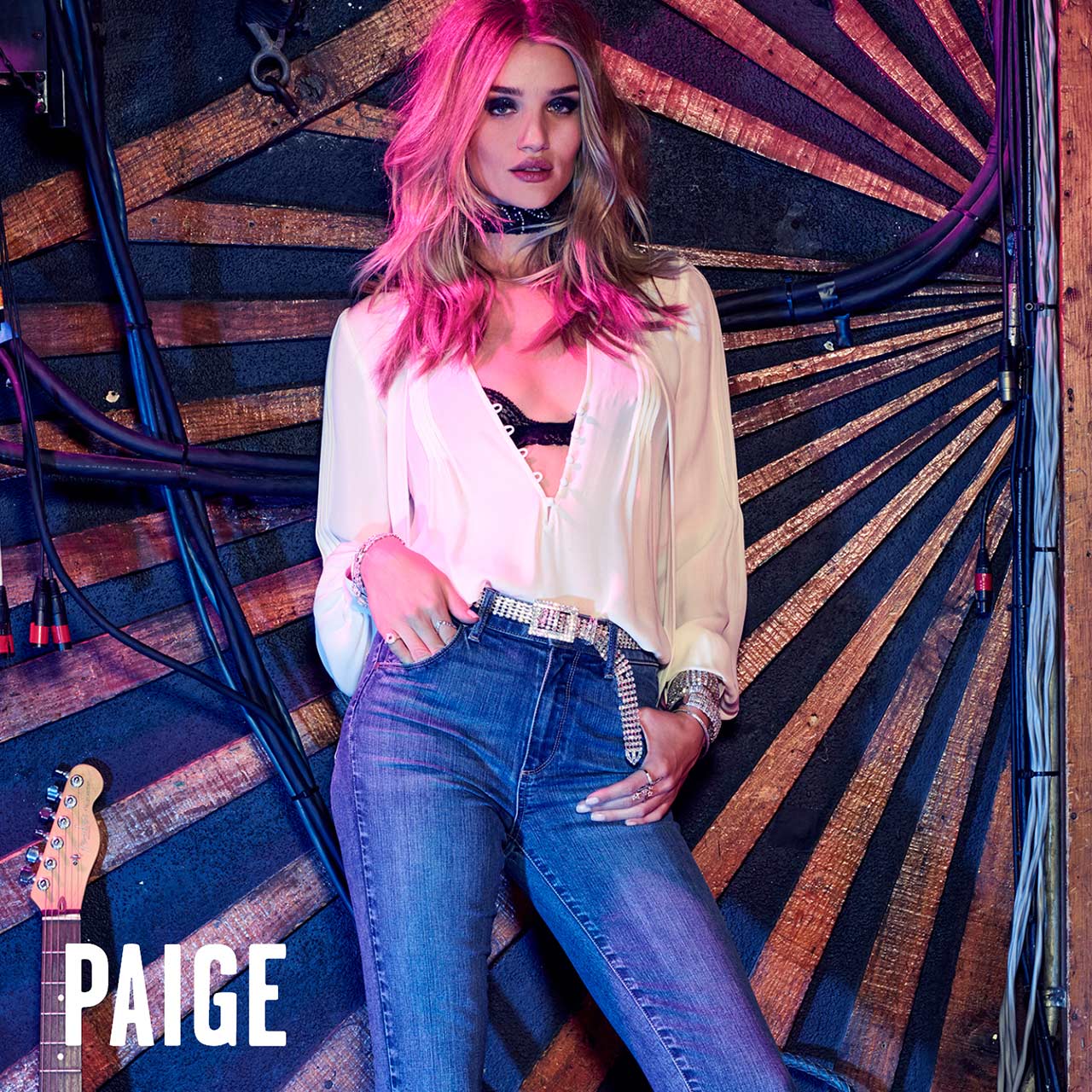 I am very excited to announce the brand new PAIGE Fall 2016 Ad Campaign starring British model and face of the brand, Rosie Huntington-Whiteley. These photos are hot off the press and have just been unveiled by Paige Adams-Geller and Rosie themselves.

PAIGE has gone for a different approach this time. We are used to seeing the gorgeous Los Angeles desert locations, but Fall 2016 was shot at the iconic Troubadour nightclub in West Hollywood, featuring Rosie Huntington-Whiteley gracing the same stage as Fleetwood Mac, The Doors and Elton John. Isn’t this an amazing and edgy location to shoot these photos?

For the Fall 2016 PAIGE shoot, the inspiration was drawn from the set location. Paige herself was inspired by the Troubadour’s nightclub scene of the 60’s and wanted to show Rosie as the ‘girl with the band.’ Both ladies enjoyed collaborating on the styling and hair and make-up for the shoot, using Ziggy Stardust, metallics, platforms and loads of jewelry for their looks.

“Shooting at the Troubadour was the perfect backdrop for the Fall 2016 collection which was inspired by the glam rock and rock and roll era. The set of such an iconic Hollywood musical venue brought the images and campaign to life. Looking forward to sharing the new looks with everyone!” said Rosie Huntington-Whiteley.

“The Troubadour is very quintessential LA and since my collections always have a rock-n-roll vibe, it was clear we had to shoot there for the Fall 2016 ad campaign. I’m very grateful we were able to shoot at the Troub and show off the collection the way it was designed. Rosie and I were both very much in our elements there too – our names on the marquee, lights on the stage, a band set-up, a wind machine, and maybe some singing in between.” added Paige Adams-Geller.

The designer and supermodel turned to Rosie’s stylist, Cher Coulter, to help curate the looks and showcase the new silk tops and stretch leather pants, which you can see in some of the photos. The looks ranged from a lace-up bodysuit to silk buttoned up blouses, and stretch leather pants to high-rise cropped flares in vintage black, giving a whole new look to the classic PAIGE collections. Their usual photographer, Naj Jamai, was on hand to capture Rosie’s natural sense of style and the essence of the PAIGE brand, while the rest of the creative team was rounded out with hairstylist Christian Wood and make-up artist Kate Lee. What do you think of these 5 PAIGE Ad Campaign photos? You can shop PAIGE online at Shopbop.com. 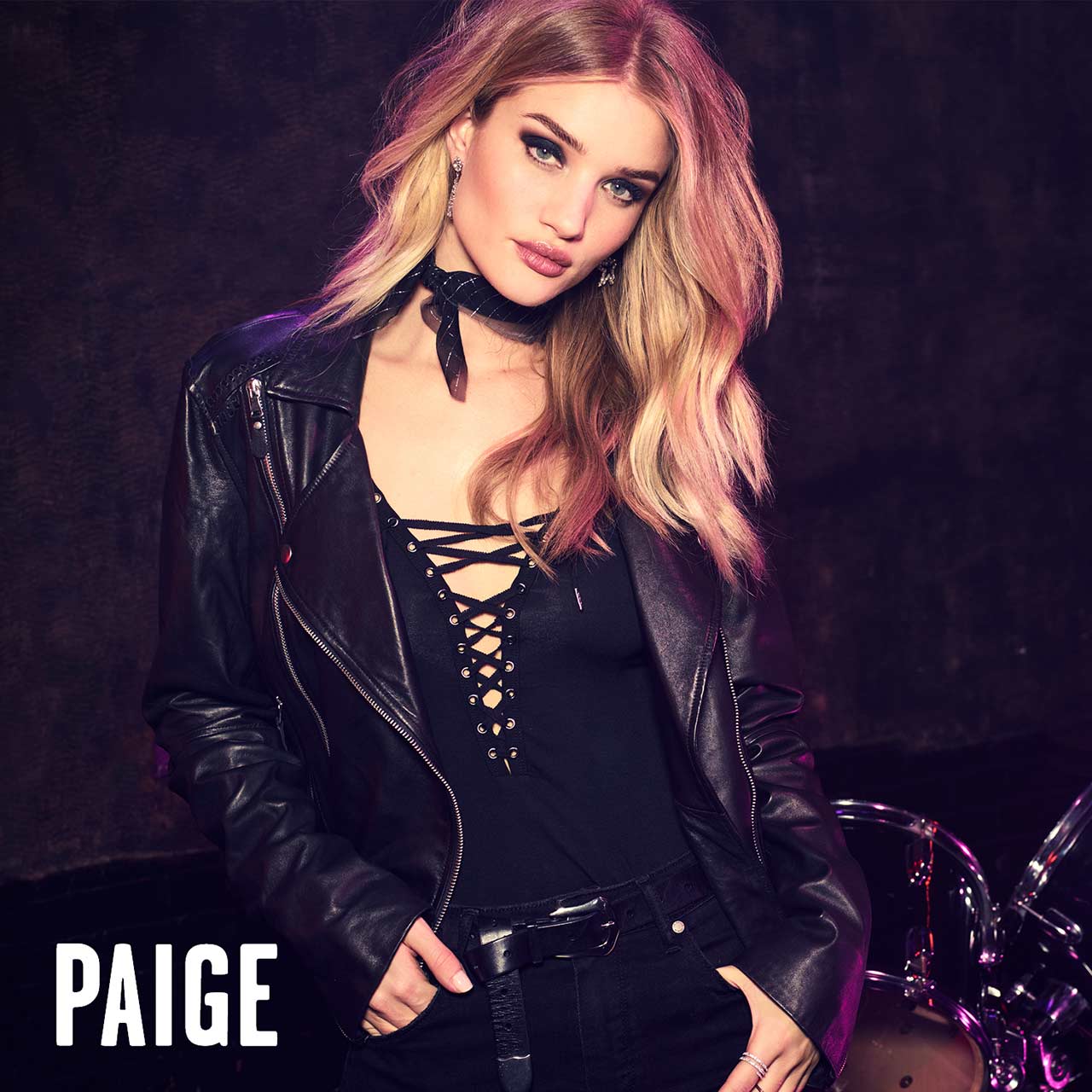 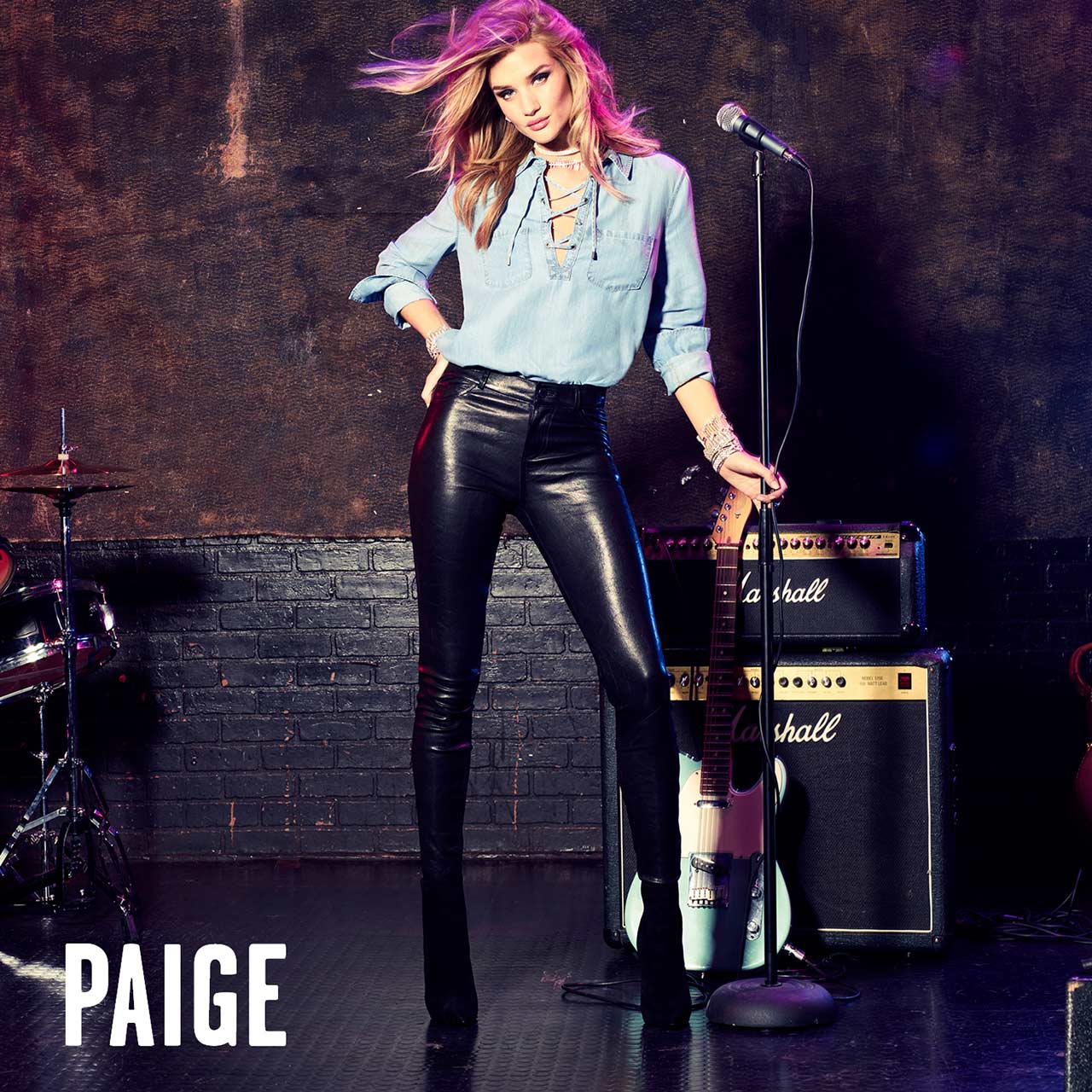 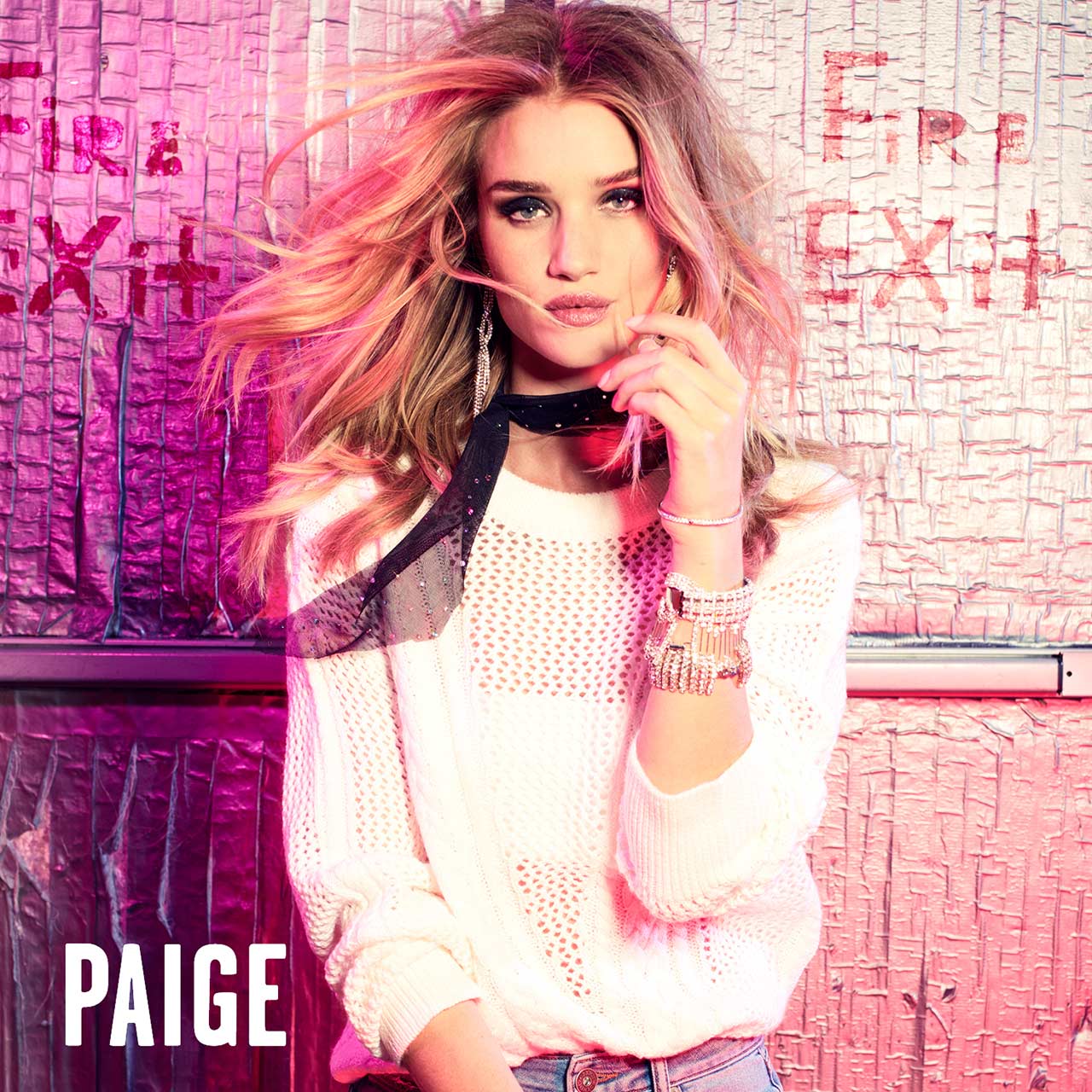 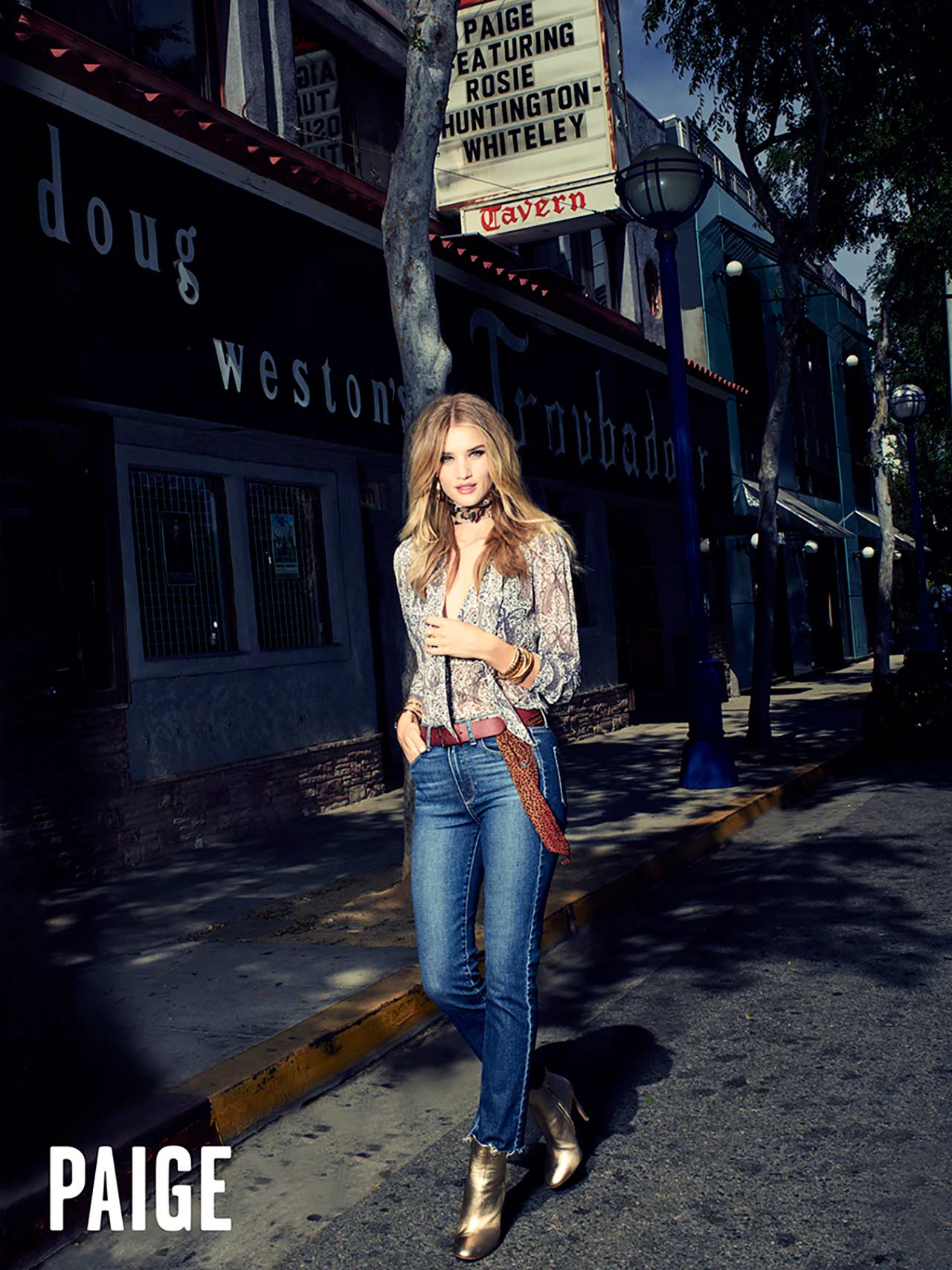